I posted this announcement several weeks ago.  It turns out the date for the concert was incorrect on the original poster.  Here's the corrected version.  Feel free to share with other dulcimer enthusiasts.  Don't miss this fantastic dulcimer event, right here in our own "backyard". Make plans to attend.  Mark your calendars today! 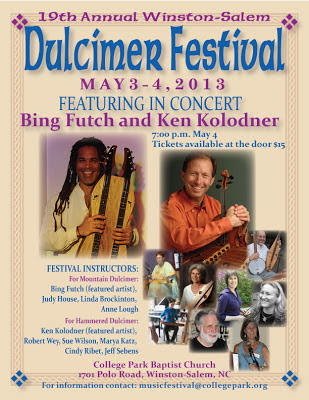 Check This Out ... The website is still under construction, but you can get a sneak preview of what's being planned for the Winston-Salem Dulcimer Festival at W-S Dulcimer Fest 2013

Playing Music for Others is the Greatest Gift

I'm continually surprised at the people I run across in the community who make a point of telling me how much they have enjoyed hearing my music.  It happens quite frequently this time of year because I've been "out" there a lot, performing special music during church worship services, presenting programs at holiday events, playing at private parties. People get quite specific about how a particular tune made them feel, or how the ambiance of the evening changed their mood. It's clear to me that music touches us deeply, and one never knows how far-reaching the effect might be.

One thing I have learned for sure. The opportunity to play music for others is a gift. It's not about me. It's not about the beautiful arrangements and carefully worked out medleys. It's not about a perfectly executed program. It's simply about the music. It's about the real-time energy that flows from me ... my heart, my mind, my soul ... through my hands, into the hammers, onto the strings, and through the air, creating an ocean of sound that washes over the listener, awakening him / her to a different way of being.

Let us all aspire to use that great Ocean of Sound to serve the way of understanding and love.
Posted by Sue at 1:29 PM No comments:

I stuck Steve and Ruth Smith's holiday recording, "An Appalachian Winter", into my car's cd player a couple of weeks ago, and there it has stayed, keeping me company as I drive around town, completing the many errands that must be accomplished this time of year. Gentle instrumentals, played from the heart ... just the thing to cultivate a little calm at the center of this busy time!

Check This Out ... If you haven't heard Steve and Ruth's music, you owe it to yourself to check it out. Steve and Ruth Smith - Appalachian Winter
Posted by Sue at 2:00 AM No comments:

'Tis the week before Christmas ...

... and all through the house, not a creature is stirring, not even a mouse.
The stockings are hung by the chimney with care. The decorated tree looks good over there.
And I'm in my 'jammies, despite things to do, but, boy, am I sick!  At least it's not flu.

Just when you think you've got everything figured out and neatly fit into a manageable schedule, life throws a curve ball (or three) forcing a re-prioritization of "things". That's how the last few days have been around here. You never know what the day will bring!

But at the end of the day, it does help to remember ....
What is done, is done;
What is left undone, remains undone.

From my cozy perch on the couch, covered with a blanket of fleece, I'm thinking about what gives me joy ... the presence of family and friends, gathering around the table - even for something as simple as soup and bread, watching the effects of Christmas magic on the face of a child, singing songs of old.

Today I don't have any profound dulcimer-playing words of wisdom other than this ...
Do what you love ~ love what you do. Take time to play some music!

The Light is descending, hopes are high. Embrace your family, the solstice is nigh.

Email ThisBlogThis!Share to TwitterShare to FacebookShare to Pinterest
Labels: dulcimer

I just placed an order for a bunch of Snark SN-2 Chromatic Tuners, taking advantage of a $0 shipping and handling deal on Amazon.  If anyone is having a tuning emergency, they'll be here before Christmas!

I keep tuners on hand for my students, and I love the Snark. It's so easy to use!  It clips right onto your instrument, so no separate wire and contact mic.  It's convenient, precise, and reasonably priced.  And the ones I ordered today are RED!

Check This Out ... Looking for the perfect little stocking stuffer for the musician in your life?  Or the next cool gadget to keep in your gig bag?  Check out the Snark tuners.

PS  Be sure to shop around! You'll see quite a variation in prices. You should be able to find the chromatic Snark online for $10-15.
Posted by Sue at 8:53 AM No comments:

I hear my students complain about how hard it is to maintain a decent level of enthusiasm for practicing. Here's an idea ... schedule a gig for yourself. It's a great way to make your practice more meaningful. It gives you a deadline and forces you to focus on getting it right.

If you're feeling shy, start by playing background music. One of my long-time dulcimer buddies refers to this as "potted plant" music. Believe me, playing in the background and playing on stage are two different experiences. Do yourself a favor. Take yourself out of the limelight. In some settings, the audience won't even know live music is being played. They'll think it's a cd!

What's that you say? Nobody's beating down the door with invitations for you to play? No worries! There are plenty of ways to make your own gigs.


My first public appearance was at a fundraiser ... a contra dance sponsored by our local non-profit Education Foundation. Without much fanfare, I set up my dulcimer in the middle of the floor during "intermission".  I played a few tunes. I don't think many folks paid much attention. But Jim did. He happened to be assistant coach of my son's soccer team. As I was packing up he approached me and said, "I didn't know you played the hammered dulcimer! I play the fiddle. We should get together and play some music sometime." That's how Blue Moon Rising got started. The two of us invited two other friends and formed a band that played together for 10 + years.

So, use your imagination. Put yourself out there! You never know what it might lead to.  And it might be just the thing to take your practice and playing to the next level.

PS ... This time of year, some venues are overrun with do-gooders, and I do mean that in the most positive way.  Scout troops, Sunday school classes, amateur musicians :-) are all thinking about caroling and looking for ways to spread good cheer.  Think about scheduling an appearance in January or February when entertainment is more scarce.

"There is no such thing as a difficult piece of music. A piece is either impossible or easy. The process whereby it migrates from one category to the other is known as practicing."
~ Sir Yehudi Menuhin 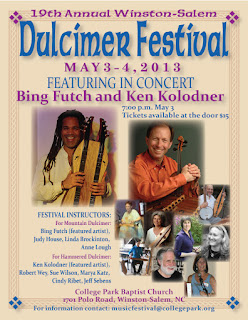 The Winston-Salem Dulcimer Festival takes place annually on the first full weekend of May. It's a great place to meet up with old and new dulcimer buddies. Expect top-notch instruction, inspiring and entertaining concerts, jam sessions, dulcimer related cd's, books, and accessories for sale, and a whole lot of fun ... right here in central NC. Mark you calendar now and make plans to attend!

Silence as Technique in Music

One of the challenges and creative thrills in playing the hammered dulcimer is coming up with your own arrangements. If anyone had told me 15 years ago that I would be arranging my own music I would have laughed in disbelief. But it happens. As you learn your way around the instrument - practicing scales and chords, increasing your repertoire, accumulating ideas from other player's arrangements - you fill up your own bag of tricks. You develop opinions about what you like to hear and what you like to play. Out of this, your personal style emerges.

Now, the "bag of tricks" can be quite complex. But today I have one thing on my mind ... fill notes.

One arrangement idea is to fill "space" in a tune using arpeggiated chords, pieces of chords, pieces of scales, drone notes - or some combination of all these things - as "fill notes". The technique can be very effective. It creates a full sound. The instrument is laid out perfectly for it. It's fun! AND ... it's easy to get carried away. Don't overdo it! Plan for "empty" spaces.


Good luck incorporating more "space" into your arrangements.  Here's one jazz musician's take on The Role of Silence in Music .

"The pause is as important as the note."  ~ Truman Fisher
Posted by Sue at 8:18 AM No comments: