Whilst we deliberate how to begin a thing, it grows too late to begin it. ~ Quintilian
Posted by Sue at 8:00 AM No comments:

I want to Check This Out!

East of Albuquerque, near the village of Tijeras, NM, on the famous Route 66, there is a set of rumble strips that will play 'America the Beautiful' if you drive over them at 45 mph. Anyone traveling that way this Thanksgiving weekend?!

Thank you MUSIC for keeping us connected!
Posted by Sue at 8:00 AM No comments:

You may have heard of Black Friday and Cyber Monday. There's another day you might want to know about: Giving Tuesday. The idea is pretty straightforward. On the Tuesday after Thanksgiving, shoppers take a break from their gift-buying and donate what they can to charity. ~ Bill Gates

It's true. My students are often incredulous when first introduced to the idea of chord inversions.

It's easiest to study this at the instrument, but I'll try to put it down in words here. Perhaps you can follow along with a hammered dulcimer in front of you. For simplicity's sake, let's use a major chord as an example. Consider the D chord mentioned above. To create a major chord, simply play the 1 3 5 of the major scale:
Play those as an arpeggio...1-3-5  [D-F#-A]  Congratulations! You just played a D chord in the root position.

Now, get this radical idea. You could play those notes in a different order.


There are patterns that make this easier to see and put into practice on the hammered dulcimer, but that's a big topic for another day! or maybe a lesson or three with your favorite teacher.

PS: The most important thing to consider when naming a chord inversion is the lowest note played. It doesn't really matter in what order the rest of the notes fall. Also, as you begin to add more complex chords to your musical repertoire, the more notes a chord contains the more inversions are possible!

If children are not introduced to music at an early age, I believe something fundamental is actually being taken from them. ~ Luciano Pavarotti
Posted by Sue at 8:00 AM No comments:

Our brains our wired for music.

Check This Out... You may have heard that studies show music to be effective in the treatment of certain health problems. Research also suggests that harmony, melody, and rhythm invoke distinct patterns of brain activity and growth in young children. The brain actually grows in response to musical training, sort of like a muscle responding to exercise. Check out the details here:

http://wakeup-world.com/2016/07/25/if-you-want-to-accelerate-brain-development-in-children-teach-them-music/
Posted by Sue at 8:10 AM No comments:

Ken Kolodner Coming to the Triangle on January 8, 2017

Here's something to look forward to after the holidays... 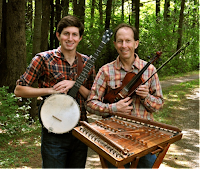 My long-time teacher and mentor, Ken Kolodner, along with his son, Brad Kolodner, will be doing a mini-tour of North Carolina after the first of the year. They will be landing in little ol' Pittsboro on Sunday afternoon, January 8, 2017, ready to play some music... and you're invited!

Based in Baltimore, this father-son duo combine exceptional talents to produce an innovative take on traditional and original music played in the old-time style. With Ken on hammered dulcimer and fiddle, and Brad on clawhammer banjo, banjola, gourd banjo, fiddle, and vocals, they perform tight and musical arrangements that communicate a real passion for the music. An added bonus... bassist Alex Lacquement will join them to round out the sound. It's sure to be a toe-tapping good time! Check out this youtube video for a sample of Ken and Brad's music: Skipping Rocks

And how about this? Ken and Brad are pleased to announce the release of their third CD together, The Swift House. They will be performing from the new recording! We'll be part of the cd release party!!

You don't want to miss this. The fun will begin with an afternoon of hands-on instruction. After all, music is not a spectator sport! Ken will teach a hammered dulcimer workshop while Brad teaches a clawhammer banjo workshop. Come learn a tune. Practice some embellishments. Pick up a few tips and tricks to enhance your playing. You're bound to learn something new.

That evening, Ken, Brad, and Alex will perform in concert at St. Bartholomew's Episcopal Church, Pittsboro. Sue Wilson (That's me! local hammered dulcimer player and teacher) and Betsy Kraus (on concertina) will be the 'warm-up' band. Who knows who else will be tapped to share the stage?! It should be quite the variety show!

Be sure to bring your acoustic instruments to the concert, because afterwards there'll be a jam session. I know it's Sunday night and all, but we gotta have a little fun. Let's play some music together!

WORKSHOPS
Sunday, January 8
Geared to advanced beginners and intermediate players, but all are welcome

After Monday, 11/14/2016, you may also purchase reservations at www.kenkolodner.com

Be sure to visit the Ken and Brad website at www.kenandbrad.com , and look for them on Facebook at Ken and Brad Kolodner.

Bring your friends! Spread the word! The more folks, the more fun!

Our lives begin to end the day we become silent about things that matter. ~ Martin Luther King, Jr
Posted by Sue at 8:00 AM No comments: