Begin doing what you want to do now. We are not living in eternity. We have only this moment, sparkling like a star in our hand - and melting like a snowflake.  ~Francis Bacon, Sr.
Posted by Sue at 7:39 AM No comments:

CTO … Must Have for String Care

What is that? A piece of chocolate?
It's a rust eraser! 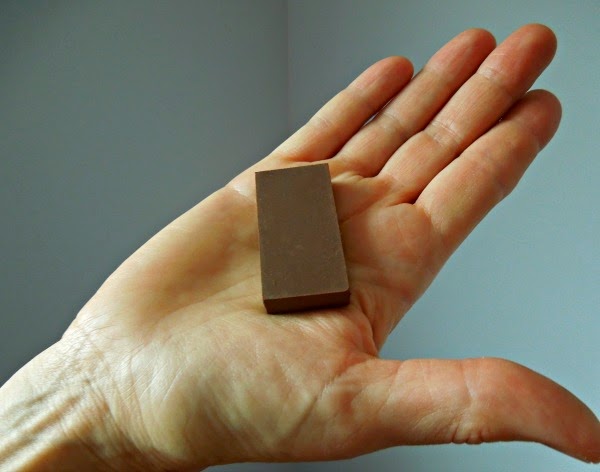 Indeed. And from the good folks at Song of the Wood : This polishing cake is actually a small block of emery impregnated rubber… a lot like a pencil eraser. It works "miracles" in removing tarnish and dirt from steel, brass, phosphor bronze, plain or wound musical instrument strings. In some cases we've been able to "restore" old strings to near new condition by simply polishing with this cake, thereby avoiding the need to completely restring a hammered dulcimer … which, by the way, is quite a job!

A group of like-minded individuals 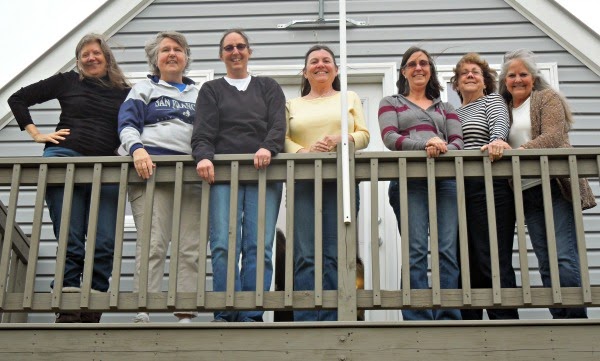 Gather to practice and play music 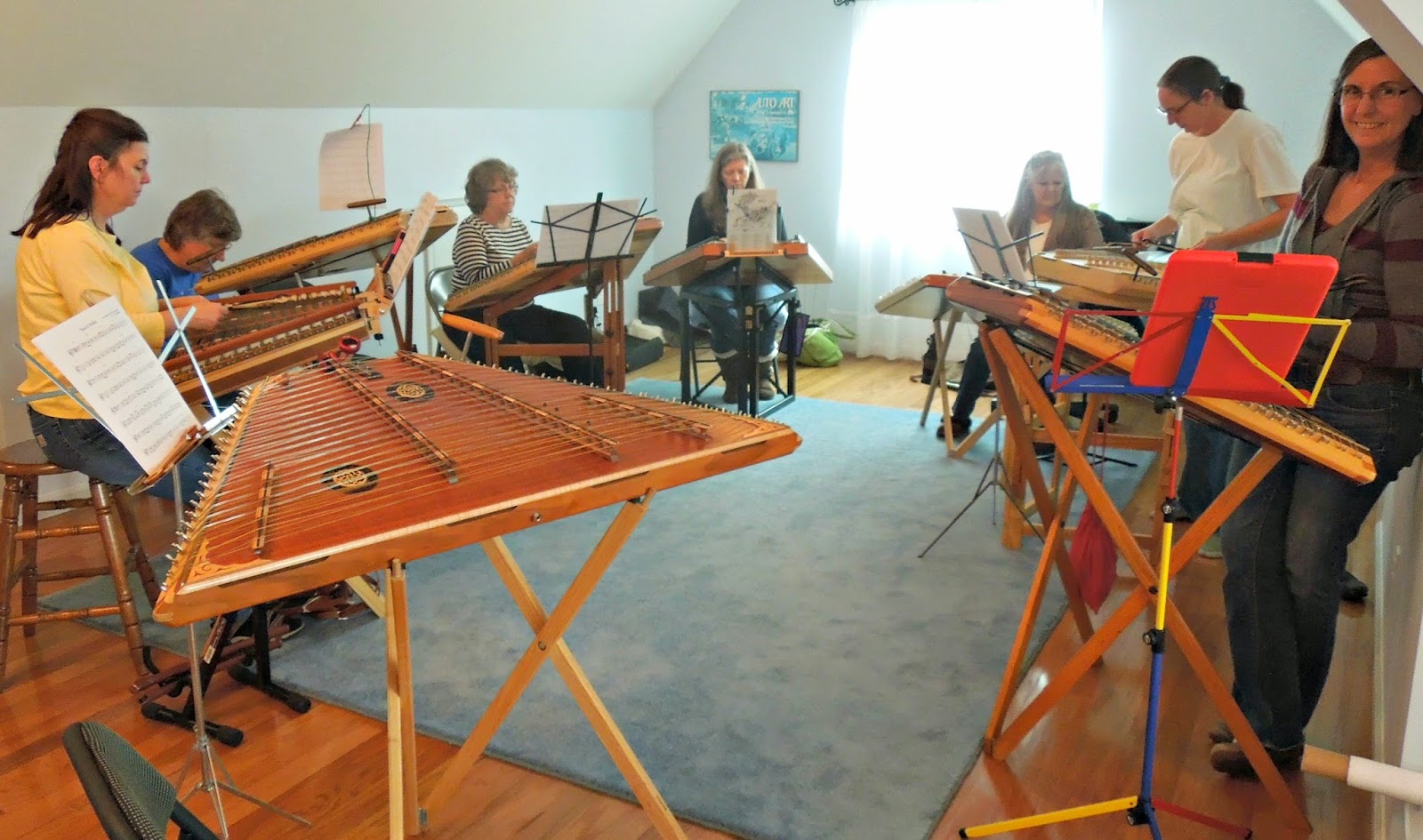 The setting is lovely

The hostess is the best 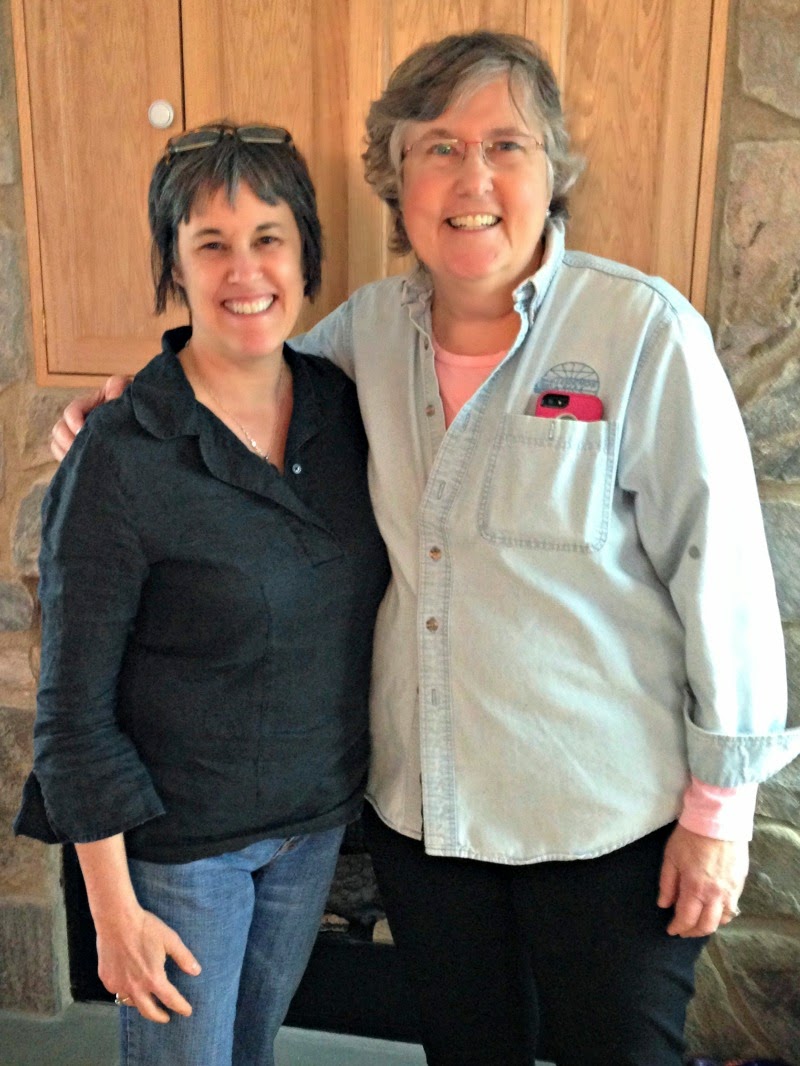 The hammered dulcimer IS the road to fun and fellowship! 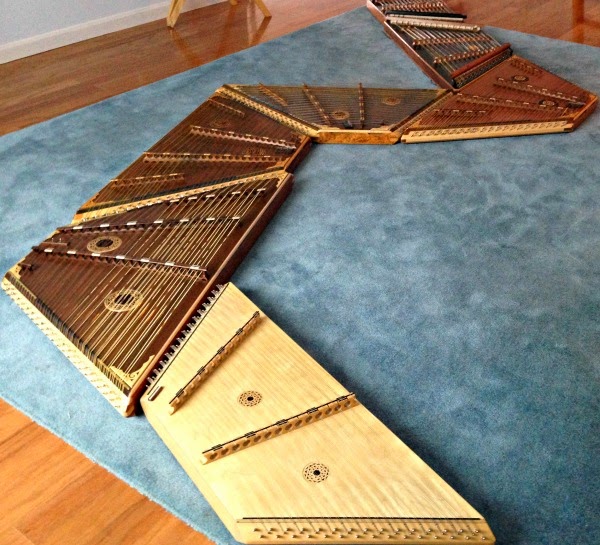 This was Martha's 8th Annual Dulcimer Day on the Mountain! It's become an eagerly anticipated, weekend-long event that works as a group effort. Martha and hubby provide the space. Sue Wilson puts together some intense practice for Saturday. Everyone pitches in for meals and snacks and associated clean-up. The neighbors come in for a casual house concert and dessert on Saturday night. In between we share everything from music to gadgets to life situations to … well, by the end of the weekend we almost certainly have learned something significant from each person! I encourage you to put together your own magical dulcimer "day"!
Posted by Sue at 10:21 AM No comments:

"Life seems to go on without effort when I am filled with music."  ~ George Eliot, The Mill on the Floss

St. Patrick's Day is an enchanted time - a day to begin transforming winter's dreams into summer's magic.  ~ Adrienne Cook
Posted by Sue at 11:25 AM No comments:

If you're struggling to become exceptional at something (like playing the hammered dulcimer), Ira Glass, host of the acclaimed radio show "This American Life," has some words of wisdom for you.


Check This Out … Ira Glass shares his advice on how to make the work you're doing be as good as your ambition. Close the gap by doing this:  http://www.mobiledia.com/news/188186.html
Posted by Sue at 9:44 AM 2 comments:

… and maybe you should, too!

We had a great mini-workshop here in the Triangle last Sunday afternoon. 13 Trapezoids gathered at the Community of Christ Church in Cary for 2-1/2 hours of intense instruction. Lots of arrangement ideas -- including the challenge of playing syncopated rhythms -- were applied to two popularly well-known tunes, I'll Fly Away and This Land is Your Land. The big advantage to choosing tunes that are familiar to the students is that the tune is already running in their minds. They are free to focus on learning selected new ideas rather than on figuring out what the tune is supposed to sound like. But there's another reason for working with familiar tunes.

The idea of doing workshops based on widely known tunes came to me while volunteering for Hospice. At the time, much of my repertoire was based on the old-time, celtic genre of music. I found that while my clients seemed to enjoy the music, they didn't know it. I had an "ah ha" moment when after playing a beautiful slow air for Mrs. B, she said, "That was real pretty. But I don't know it. Can you play Row, Row, Row your Boat?" Indeed, I could!

That's when I started asking my clients what they would like to hear. If they had a song in mind, and that song resided somewhere in my mind, I could play it. It might take me a few minutes of noodling around. It might not be a fancy arrangement. Guess what? It didn't matter!

Many hammered dulcimer players feel called to share their music with others. Nursing homes and churches provide excellent opportunity to do this. Consider your audience while making your play list. Are they members of the "greatest generation"? or the "beat generation"? or "generation X"? Learn a few tunes specific to that generation and sprinkle them throughout your playlist. It's perfectly OK to play the fiddle tunes and slow aires that we all love, but a little familiarity will go a long way toward entertaining the listener.

If you're looking to expand your nursing home playlist, check out this list of suggested tunes to get you started.

A big thank you to Viola Suddaby for managing information dissemination for the workshop. She facilitates the monthly Slow Jam, held 2nd Sunday of every month, 2 - 4 pm, Community of Christ Church, Cary. All are welcome to attend! Contact Viola to be added to her mailing list.
Posted by Sue at 9:19 AM No comments:

Check This Out … Sue Wilson will be teaching a workshop for novice / early intermediate players, "Tunes People Know -  and Maybe You Should, Too!" on Sunday, March 9, 1:30 - 4:00 pm at the Community of Christ Church, 912 West Chatham Street, Cary. The workshop will be taught in place of the monthly HD Slow Jam. All are welcome to join the fun! 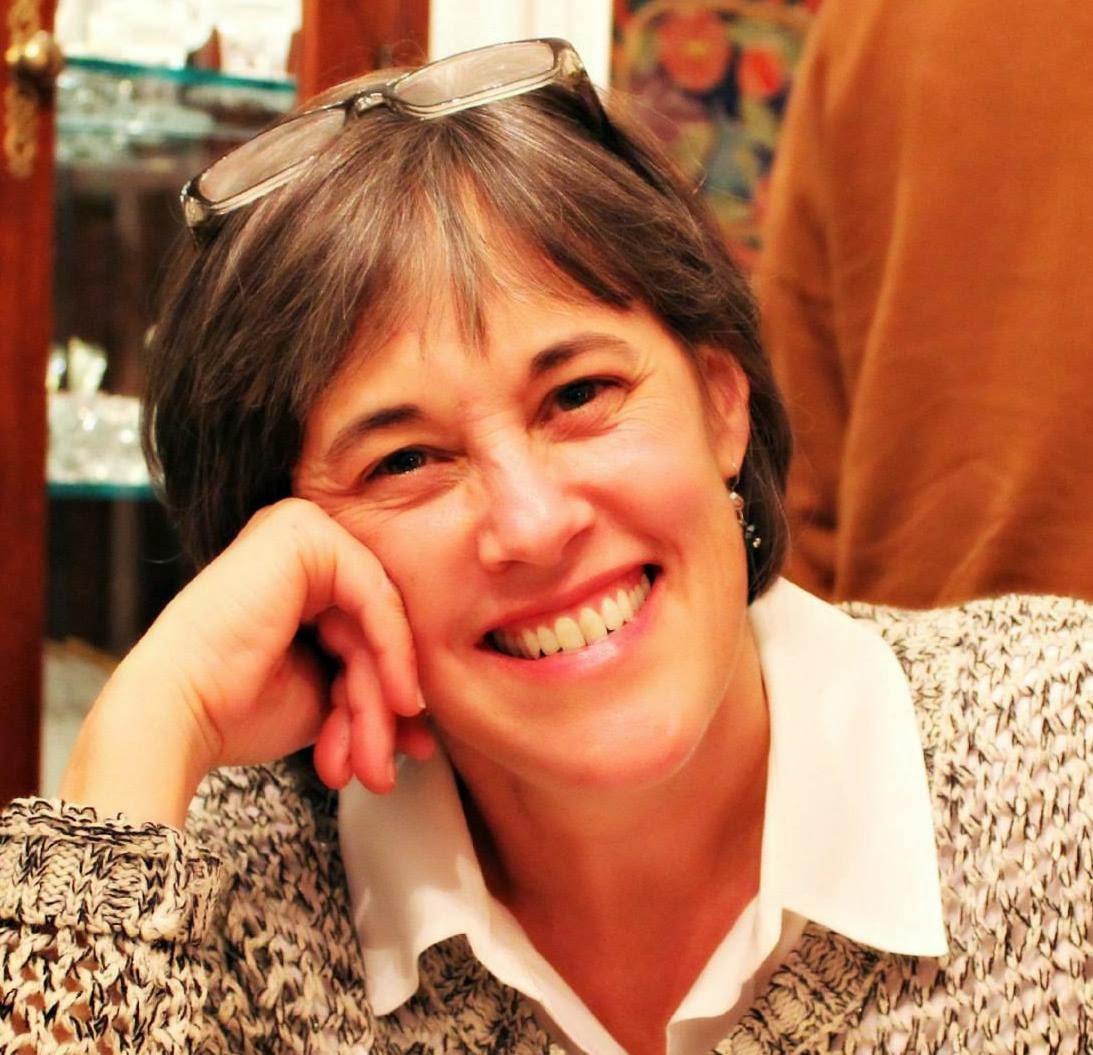 This will be the 4th annual "winter" workshop hosted by the Slow Jam group and taught by Sue. This year, look forward to using a couple of popularly well-known tunes to practice arranging ideas, with some emphasis on syncopation. Sheet music for the basic melody of the tunes will be provided prior to the workshop to those who preregister. Fee:  $30

For more information, or to preregister, contact Viola Suddaby or Sue Wilson.
Posted by Sue at 9:46 AM No comments:

Do You Suffer from Compulsive Mistake Identification?

Is that a REAL disorder? Easy to believe it is!

Imagine either of these scenarios …


As we venture out into the wider world to share our musical gifts, many of us suffer from some level of stage fright. Even though we may feel called to perform, the stress of playing in front of others is a very real thing. Now, it can be a good thing! There's nothing like an impending gig to inspire one to kick up the practice a notch or two.

But if you find yourself apologizing to audience members, confessing errors and expressing remorse for not playing the way you really want to play … you may need an intervention to deal with CMI!

This essay on leaving performance mistakes behind was written by Yoko Rosenbaum, a 14-year-old pianist and writer from Los Angeles. Be inspired by her words of wisdom!

"The stage lights are bright, adrenaline is flowing, and there is complete silence in the audience. This is the moment you’ve worked so hard for, the culmination of countless hours of practice. But of course, there’s that nagging thought in the back of your head: “What if I mess up”?

One of the most important aspects of performing is the quiet before the storm. In other words, before you are even at the instrument and during those precious moments on stage before you start to play, it is vital to collect yourself and just breathe. Performance is not just a show of technical and musical virtuosity, but also a psychological challenge. There is a reason that musicians practice so long and hard. It is to build muscle memory and to prepare for the inevitable jitters of a performance. I find that, even though it takes a little bit of time, if I use a few moments to slow my heart rate, I am able to be calmer and less frantic when I begin.
But there is also that moment that makes your heart stop. Your finger slips, you get distracted by a cough, or the rustle of a program from the audience, or your mind just goes blank. You make a mistake. The first thing I remember to do if that happens is to keep a game face. Chances are the audience didn’t notice, but if the performer stops, or grimaces or makes a noise, then they know something is wrong.
The second thing to keep in mind is to keep going, no matter what. Before a concert, I often practice the “Stop and Go” method, during which I stop in quite random places in my piece and see whether I can start again. This prevents the possibility of making a mistake and not being able to recover and lessens the chance that the entire performance might get sidetracked.
The most important thing to remember about making mistakes is that it is not the end of the world. Before and during a concert, a performer should be focusing on the music and how to make the performance go well, not worrying about what happens if things go wrong. Often the obsession over making a mistake leads to more mistakes because that is all the mind can think about. However, one small mistake does not ruin the entire performance. One of my chamber coaches reminded me that if I do make a mistake, I should play the next 10 measures the most beautifully I’ve ever played them. Even if it is easier said than done, try not to stress about what might happen. Instead, relax and enjoy the music."
https://www.sfcv.org/article/if-its-not-baroque-dont-fix-it-how-to-leave-performance-mistakes-behind
Posted by Sue at 10:43 AM No comments:

"So I leave now with this: The intention of art (music) is to be, to represent, to know your most authentic and unique self. There are no rules. It's time to play." ~ Saranpreet  (Liz Moudy)