Begin ... to begin is half the work, let half still remain; again begin this, and thou wilt have finished. ~ Marcus Aurelius
Posted by Sue at 8:11 AM No comments:

Begin challenging your own assumptions. Your assumptions are your windows on the world. Scrub them off every once in while, or the light won't come in. ~ Alan Alda
Posted by Sue at 10:30 PM No comments:

Trapezoids just want to have FUN!

17 trapezoids gathered in Winston Salem on MLK Holiday to play at music with Marya Katz, our fearless leader. We played by ear. We improvised. We learned tunes. We made up variations on the theme. We did backup. We learned a new word, "hocket." It was inspiring. It was painless. It was fun!

Thank you, Marya, for a very pleasant day! 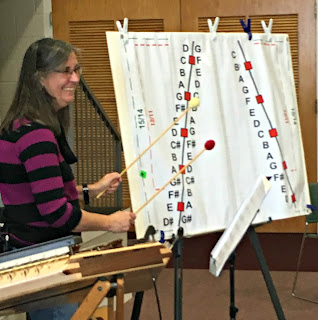 God has wrought many things out of oppression. He has endowed his creatures with the capacity to create - and from this capacity has flowed the sweet songs of sorrow and joy that have allowed man to cope with his environment and many different situations.  ~ Martin Luther King, Jr.
Posted by Sue at 8:00 AM No comments:

Just a little reminder that Marya Katz is teaching an all-day workshop in Winston-Salem next week. It's her annual MLK Day gathering! Hope to see you there. Basic facts below. Check out the January 4 blogpost for more detailed information.

$65 includes lunch and all materials

Hammered Dulcimer Performance & Instruction
website: http://www.dulcimations.com
Posted by Sue at 8:40 AM No comments:

I'm a little miffed that Mother Nature intervened to ruin our good plans for Sunday. It was such a disappointment to have to postpone the workshops and concert with Ken and Brad Kolodner. I realize we are in the middle of winter, but two inches of sleet, topped by an inch of snow and record setting low temps this past weekend?!? Here in central NC, there's nothing to do but wait for the mercury to rise and release us from our forced hibernation. Finally, four days later, we hit the mid-50's. That ought to do it!

Yes, before the winter storm of early 2017, Betsy and I were preparing to perform on a stage in front of an audience of 100+. Yikes! How does one do that? Well, it becomes pretty clear that FOCUS is everything. It's not a little thing. It is THE thing.

Don't get me wrong. It's not about perfection, although that would be nice. It's about being in the moment, aware and flexible enough to start at the beginning and to play to the end, no matter what happens!

I don't know about you, but MY mind is full of chatter ... to-do lists, anxieties, fears, judgments, what-if scenarios. It's difficult to turn off all that noise. It's true that I have experienced fleeting moments of pure bliss, playing music, in the flow ... until my mind notices. "Hey, wow, this is feeling great!" That's the kiss of death. As soon as the brain voices an opinion, it's all over.

One would think that playing music requires such attention that our brains would have no room to wander and get into trouble. Indeed, engaging one's mind is a strategy for silencing the chatter. The problem, intentionally or not, many of us rely too much on muscle memory and habit. We are good at rote memorization and repetition, but we don't really know what we're doing.

So, let's do engage our minds. Let's think about what we're doing. Focus on components of the tune, arrangement cues, technique, expression, balancing the sound with other ensemble members ... whatever is meaningful or helpful to you. For example, one of the best things I've ever done for my playing is to practice naming the chords in the chord progression. Mix in some description of what's happening in the tune or accompaniment, such as "circle around on D" "scale up to A" "octave E's" "grab Bb"  "drop to the mark". These become landmarks.

I'm still a work in progress, but I know the goal. FOCUS. In so doing we expand awareness, improve mental agility, calm the chatter, and open up a world of creative possibilities!

If we had no winter the spring would not be so pleasant.  ~ Anne Bradstreet
Posted by Sue at 10:37 PM No comments:

… and we are truly disappointed to announce that the WORKSHOPS and CONCERT scheduled for January 8 have been POSTPONED to a later date due to conditions related to the winter storm.

Ticket prices will be refunded. Details about that will be worked out and communicated in a separate email from Ken.

Ken & Brad and Sue & Betsy will be looking to reschedule in the near future. We will be in touch with the specifics. We hope to see all of you then!

If you have immediate questions or concerns, please contact Sue at (919) 542-5854 or at sswilson123@gmail.com as Ken will be on the road, traveling back to Baltimore, today.

Thank you for your interest in our music.

Marya Katz to offer Workshop in Winston-Salem on MLK Day

Continuing the annual tradition, Marya Katz will be teaching a day-long hammered dulcimer workshop in Winston-Salem on the Martin Luther King birthday holiday.

Learn a couple English dance tunes... a waltz in D-major and a reel in E-minor. Experiment with rhythm, melody, and harmony to create interesting sounds. Have fun playing and learning from a fantastic teacher and player. Marya will send participants the basic version of the music prior to the workshop. Just ask when you register!

Got the day free? Come play music with a bunch of trapezoids. What better way to spend a winter Monday?! Details below:

$65, includes lunch and all materials.
Other books and CDs will be sold separately.

No need to pay in advance, but reservations are recommended as spaces are limited.
Email Marya and Terry Lefler to reserve your spot. Terry will send information about lunch orders. Reserve your spot today to avoid disappointment!

Hammered Dulcimer Performance & Instruction
website: http://www.dulcimations.com
Posted by Sue at 8:34 AM No comments:

And now we welcome the new year, full of things that have never been.  ~ Rainer Maria Rilke
Posted by Sue at 7:59 AM No comments: