Traveling with the Hammered Dulcimer

What's a dulcimer player to do when her daughter gets married and moves to New Zealand? Guest blogger, Bess Crider, shares her story of transporting an instrument to the "land down under".

Dan Landrum inspired me to try and take a hammered dulcimer on an international flight when he described his trip to Africa with a dulcimer in tow on his Dulcimer Geek Podcast. He indicated that there are new rules on US flights that allow musical instruments if they can fit in the overhead bins or the steward's closet. This website had a lot of information that gave me confidence: 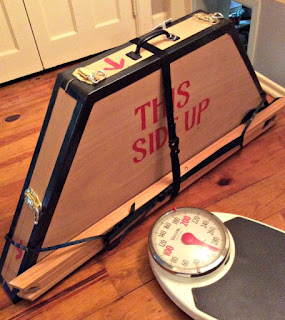 So, with my sweet Jim Trantham 15/15, which had a custom made plywood case, I decided to take the plunge and carry a dulcimer to New Zealand to leave at my daughter's house for all the anticipated extended visits. The rules allow odd sizes, and weight is not an issue with instruments (not true on Air New Zealand, but we'll get to that later). I jury-rigged a way to strap a scissor stand on the outside of the case and attached some castors on the bottom. 30 lbs! Ugh for the long walk down the concourse, but do-able. 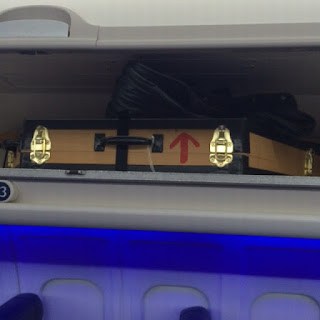 Not a single eyebrow was raised on any of the Delta flights. The dulcimer easily fit into the overhead luggage bin on one flight, and the steward's closet on the other. 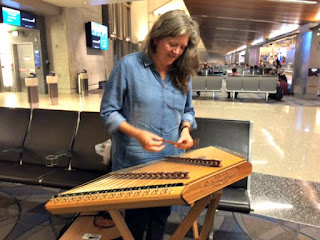 In the airport, it was quite a slog to carry the dulcimer between connections, even with the casters on the bottom of the case. Once I got to LA, however, I was able to get a luggage trolley. It was nice to have something to do between the long layovers, by the way.

Air New Zealand planes could not accommodate the instrument in their luggage bins, but allowed me to "gate check" the instrument.  This meant it would be hand carried onto the plane and not have to go on the conveyor belt. This happened in both LA and Auckland, where they actually have a special place for oversized luggage. I had to wait in line in Auckland, as evidently there are lots and lots of oversized pieces from all the sporting activities there (golf bags, surf boards, bikes, and many strollers and car seats). Because NZ has different rules for luggage allowances, I had to get a waiver for the extra weight, but since it had been allowed as carry on from the US, I was not charged for excess baggage or weight. 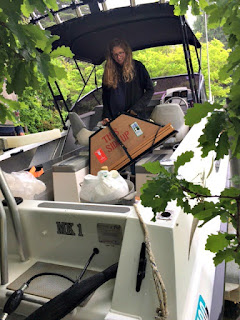 The final leg of my journey included both car and boat to get out to the beautiful Marlborough Sounds. The instrument made it just fine, and I will soon forget how heavy it was between connections.

I am glad to have the heavy wooden case here in NZ, since I am storing it under a bed when I leave. I think a soft case would have worked fine, however, as it was hand carried as fragile luggage. A soft case certainly would have been lighter! Most important to the successful trip, though, was the smaller sized instrument, which fit into the overhead luggage bins.

Thank you, Bess Crider, for contributing this interesting piece to the Trapezoid blog! ~ Sue
Posted by Sue at 8:00 AM